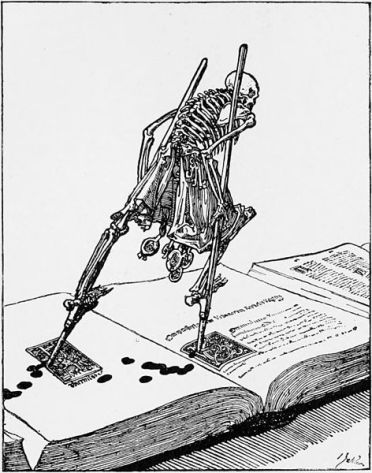 I always assumed death
would devour me
in his dense boney fingers,
snuff out my life, like
crushing flies on a window pane;
and forevermore
I would write
of the blackest mold
beneath my eyelids.

However,
books with spines
spewing sunshine and
colorful ribbons
sheltered
white sheets
of paper inside me.

Now, I press
at the balls of my feet,
waiting for anything
to devour me.

Enoch Thompson is an aspiring poet and storyteller. He was born and raised in Detroit, Michigan. He has been homeless off and on since he turned 18. He taught himself how to read, which is why he has a passion for reading and writing. He believes that becoming the best writer he can be is how he can become the best person he can be. He says that the written word has affected him by opening his mind to various new perspectives and possibilities. He hopes one day that his writing will be mind-blowing. Currently, he is a student at Utah State University-Eastern in southeastern Utah. For more poetry by Enoch, go here and here.

The illustrating image, “La Danse de la Mort” by Joesph Sattler, is in the public domain.

Michael, think of an apple, how its taste
saturates all memories of first fruit.
Probably before you grasped the word, €œapple, €
a pome caught hold of you, flavor and firm body
biting through your thin skin.
Don’t you still recall €œapple € by charms
more defined, more seasoned,
more round ripe than the word?
Agitation by a few grains from another blossom,
bulb of pale flower swollen in streams of light,
it bobs for weeks in the weather, distilling.
It sweetens in cool cellars of the moon.
It shapes into all that you remember:
Taste verging on fragrance; crisp, wooden meat;
and color like you like to imagine a heart has €”
life-red and glistening, wet.
Your hand is no stranger to apple-hearts.
Somehow that clarifies what your mind knows,
apple not just as word but as living full savor.

Michael, don’t carry in pocket the word only;
keep the whole fruit ever at hand.
Nor should you rely upon the name,
an apple doesn’t answer to its name.
Nor do we, but to the quick of the season,
immanent, juicy, red-freckled, standing our senses
on edge, now.   Forget the word, €œapple. €
From such vagaries people walk away hungry.
With out-held words and ripe, swaying language,
make apples to fill the brain’s deep belly, having first
weighted your own hand, cupped your own palm.

Patricia Karamesines lives with her family in the Four Corners region of the southwestern U.S. She has won many awards for her poetry, essays, and fiction. She is the author of The Pictograph Murders, a mystery set in the area where she lives. An adjunct English professor for Utah State University-Eastern, she teaches English composition and also works as a tutor for English. She is founding editor of Wilderness Interface Zone and a passionate advocate for the environment of human expression.

This poem was originally published on WIZ on February 2, 2011. But I thought it fit here, with other language posts, maybe a little better.

This segment is from a longer piece, Plato’s Alcove, which won an honorable mention in Torrey House Press’s 2011 Creative Non-Fiction Contest.   You can read the entire entry here. Plato’s Alcove is about my first trip to the desert back in 1982.

In the desert one day I met Coyote, the Trickster-God.   We greeted each other and sat in the shade.   I opened my canteen and drank then offered Coyote a drink.   When he thought I wasn’t looking he wiped the canteen’s mouth.   Then he drank.

I asked Coyote, €œWhy is this place so beautiful? €

He laughed and said, €œI’ll tell you a story that explains everything. € END_OF_DOCUMENT_TOKEN_TO_BE_REPLACED