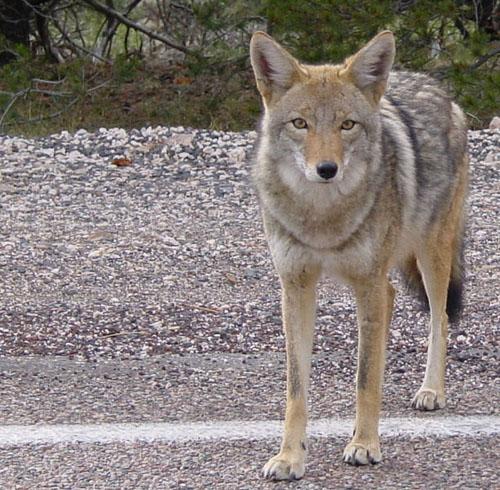 This is a rewrite of a post published here on WIZ that I’m including in my book Crossfire Canyon. I’m posting the rewrite today in response to finding a bounty-killed coyote on this morning’s walk.

April 8, 2009. As I walked out of a nearby canyon last week along a trail where I had previously encountered a curious coyote, my nose detected gases given off by putrefaction. Somewhere nearby, bacteria were at work breaking down formerly living tissue to simpler matter, dispersing an organism’s worldly good to its biological heritors.

To this we must all come. But who has come to it now, and where?

Walking deeper into the field of decomposition gases, I searched the ground, guessing what I would find. I was approaching the gravel pit, a dumping ground for domestic and wild animal carcasses and the scene of occasional war crimes of the sort some people commit against animals. It’s common to find coyote remains around the pit, along with elk and deer carcasses, tree prunings, the ashes of bonfires, articles of clothing, and aerosol cans–the residue of “huffing” parties.

My eyes had difficulty picking out the body of the coyote because his full winter regalia of desert-soils-hued fur blended in well where he had been dumped against the weathered juniper barricade a rancher erected decades ago to prevent cattle from wandering. I’m guessing the coyote was an adult male because of the animal’s size. Wind ruffled the luxuriant fur, and my own hand felt drawn to touch. But I didn’t. Touching the coyote might spark a response that under the circumstances I wasn’t prepared to support. END_OF_DOCUMENT_TOKEN_TO_BE_REPLACED

When two universes collide
one is destroyed, or
is it
masked?
hidden
in the wind,
preserved,
like a seed to come
forth later?
The other however
folds in on itself,
slowly,
a topological twisting,
until it engulfs itself and
is gone.

Coyote-Man, it seems, never
learned how to deal
with motorized vehicles.
They escaped his desert
logic.
Hasje-altye €”Talking God €”
never prepared him for
the intrusion.
The invasion.
But who’s to blame?
Who would have believed that
metal
and carbon
seduced from the earth
could be
combined to bring
forth such a monster €”
such an engulfer? END_OF_DOCUMENT_TOKEN_TO_BE_REPLACED

In desert’s spring, even the tough-skinned saguaro,
that towers through time €”scarred, but sustained €”
blooms pure white perfection to celebrate
the joy of renewal, hope of rebirth,
cleansing rains of sorrow,
and seeds of forgiveness sown
precious drop by precious drop,
beneath a verdant olive
for me.

Young adult novelist and poet, Angela Morrison, graduated from Brigham Young University and holds an MFA in Writing for Children and Young Adults from Vermont College of the Arts. She grew up in Eastern Washington on the wheat farm where her debut YA novel, TAKEN BY STORM (Penguin/Razorbill 2009), is set. TAKEN BY STORM is a collage of poetry, dive log entries, and online chat transcripts and stars an authentic LDS girl. Her second novel, SING ME TO SLEEP (Penguin/Razorbill 2010) features a lyric writing heroine. “Beth’s Song” from the novel was recently released on iTunes by Primus: Amabile Men’s Choir. Angela wrote the lyrics for Harriet Bushman’s choral jazz oratorio, “Gideon,” that premiered in January, 2010 in Kuwait and was a contributing poet for Harriet’s 2006 concert opera, “1856: the Long Walk Home” performed on Temple Square to commemorate the Martin/Willie Handcart Tragedy Sesquicentennial. After eleven years abroad in Canada, Switzerland and Singapore, Angela and her family are happily settled in the heart of the Sonoran Desert in Mesa, AZ.

The “Wow-ee!” response of the scientists involved would make for an interesting study, as well as the “maybe it’s the first example of invertebrate tool use but maybe it isn’t” facet of the story.

Everything is smarter than we think and has the prospect of becoming smarter, including us, if we could just get over thinking we’re smarter than we actually are. END_OF_DOCUMENT_TOKEN_TO_BE_REPLACED