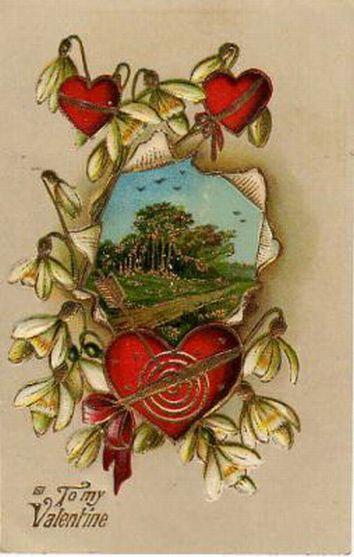 Starting February 1st, Love of Nature Nature of Love Month will open its heart at Wilderness Interface Zone.   We’re issuing a call for nature-themed love stuff. Got messages of companionship, connectionship, or of loveship you’d like to send someone? Are you weird like me and your nature is to be crazy about people AND nature? WIZ is looking for original poetry, essays, blocks of fiction, art, music (mp3s), videos or other media that address the subject of love while making references to nature–including to that work of nature as earth-moving and variable as any other natural force, human language.

We’ll take the other side of the coin of affection, too: We’ll publish work about nature spun up with themes of love.   And as always, you’re welcome to send favorite works by others that have entered public domain.

Some of us have been around long enough to have the authority to urge you to let people you care about know how you feel at each opportunity that flies up in front of you. So if you have a sweet song or sonnet you’ve written to someone beloved–or perhaps a video Valentine or an essay avowing your love for a natural critter or space near and dear–please consider sending it to WIZ. We’ll publish it between February 1 and February 28. Click here for submissions guidelines.

Our fondest hopes for LONNOL Month: Putting into the currents of language flowing around the world some of the deepest, warmest, freeze-busting words we can find. And if things work out, we’ll also be running one of WIZ’s DVD giveaways, a Pre-Hays Code movie, King of the Jungle, starring loincloth-clad Buster Crabbe as Kaspa the Lion Man.

We hope you’ll join us for this month-long celebration combining two of the most potent forces on the face of the planet–love and language.

We love the things we love for what they are.   ~Robert Frost

The emu lives in wooded and open country, costal and inland, across Australia. It is the second largest bird in the world. Its ancestor, the Dromornithid, lived at the time of the dinosaurs. Originally three species of emu roamed the land, but only one survives today; the other two were hunted to extinction for their meat and feathers.

there lies something of the dark ages in you.
through impediments where we stand your amber eyes
shift, stunningly round, under a severe black framing
of feathers.

tossed into this evolutionary era, you are still
wet, still panting with black beak frozen
in an eerie partial grin, like someone on the verge
of a death they can see.

gargoyle, griffin
estranged from your mythology

congruencies tie us, the awkwardness
found in running without lift, turning long necks round
to an age emptying its enchantment
the lady’s magic web, loosing its plait €”
to find you, me, full of such stuff.

now you kneel, backwards
on claws of a dragon, to drink
water that is just
water.

we struggle to rise, lift
the weight of ancient things
no one can decipher, not even you, now
folding their spells beneath your feathers
becoming shadow.

Kathryn Knight graduated from the University of Utah with a BS in Environmental Studies and a BA in English. She has published various poems in its undergraduate literary magazine Shades and exhibited oil paintings and photography in the annual Hammers Inc. Art Festival based in Salt Lake City. She is currently working on a Master of Landscape Architecture and Environmental Planning at Utah State University.

Roses are red;
Their odor is heady.
LONNOL month’s here–
Are your Valentines ready?

It’s Love of Nature Nature of Love Month on Wilderness Interface Zone, and we’re looking to publish love abroad.   Do you have a message of friendship and love you’d like to send someone? WIZ is looking for original poetry, essays, blocks of fiction, art, music (mp3s), videos or other media that address the subject of love while making references to nature.   We’ll also take the flipside: We’ll publish work about nature intertwined with themes of love.   Besides original work you’re welcome to send favorite works by others that have entered public domain.   So if you have a sonnet you’ve written to someone dear to your heart–even and perhaps especially your pet hamster Roley Poley or faithful horse Old Paint–or perhaps a video Valentine or an essay avowing your love for a natural space near and dear–please consider sending it to WIZ.   Click here for submissions guidelines.

We hope you’ll join the celebration.   Let’s warm up February with fond feeling.

Adam K. K. Figueira was born to the east of where he lives now, but then went west, and back towards the middle again. In addition to dabbling in filmmaking and other visual arts, he has a passion for historical European swordsmanship. He can also make you a book cover. His greatest achievements are all girls, and that doesn’t appear to be changing in the foreseeable future. Adam’s work is available to read and/or watch at his blog,  Anew; at LDS Cinema Online; his  YouTube channel; and his professional site, adamkk.com.