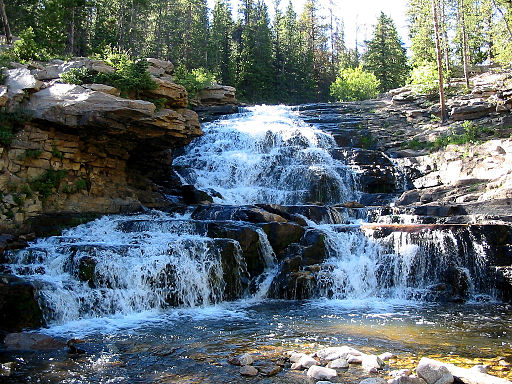 We interrupt Spring Runoff for an Earth Day pause, in prose, as a way of remembering that, among its many reasons for being, WIZ is a quiet place of earthen bearing, dressed in soil and water and seed, in sun and winter and stone. We come here to read, “o’er the mountains, by the sides/Of the deep rivers, and the lonely streams./Wherever nature [leads,]” either to hear the “still, sad music of humanity./Nor harsh nor grating, though of ample power/To chasten and subdue” or to feel a “presence that disturbs [us] with the joy/Of elevated thoughts: a sense sublime/Of something far more deeply interfused,/Whose dwelling is the light of setting suns,/And the round ocean and the living air,/And the blue sky, and in the mind of man. . . .”*

Few enough of us hear those things, or see and feel them, but fewer still do something about it. George Handley is one of those precious few, and is regularly in the breech. Handley is a professor of Humanities at BYU in Provo, Utah. He is also an active environmentalist and an avid outdoorsman. His recent (and still running) book, Home Waters: A Year of Recompenses on the Provo River, has made a substantial impression as both memoir and important work of environmental theology. George speaks and writes on the issues he raises in his book–and so much else–often and stirringly and in ways that provoke both humility of spirit and a desire to do a little something to help. He has graciously sent along the following excerpt.

Winter has been defeated, no question. It is a glorious spring day today, and I can’t resist the temptation to get in a run early this morning before the kids’ Saturday soccer games. The impression of an evergreen valley, coated in velvet grass, only lasts a month or two before the piercing sun at these altitudes brings the green into submission. I don’t mind the brown like I used to, which is why I feel all the more guilty for my pleasure, which in Utah feels like the sinful pleasures of the carnal mind. So be it. Today I will be a hedonist and I will stare unapologetically at the viridian velvet of the mountain contours.

I pick a stretch of the Provo River Trail that winds along the banks through the city. I pass under concrete bridges and across streets to keep pace with the water, which flows in a controlled and only slightly meandering line. The water is higher than usual but not by much. Before the Deer Creek Dam was built in the 1940s and before the grid of middle class homes began to spread across the land the way thin sheets of ice claim window panes in a sudden freeze, the water regularly breached the banks, depositing the sediments brought from the mountains, providing fertile spawning ground for fish, and renewing and enriching the soils of riparian life. END_OF_DOCUMENT_TOKEN_TO_BE_REPLACED 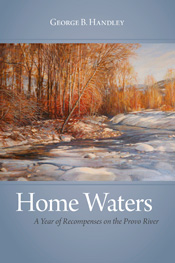 The twentieth century has gone down in history for a number of ignominious as well as heroic events, but certainly one of its more troubling legacies is its treatment of rivers. As agriculture gave way to industry and massive development of cities, water was victim to an increasingly private and individualistic conceptualization of property. Consequently, rivers suffered greater transformation than in the previous ten thousand years. They were straightened, diked, and dammed, and where I live water was transported from less populous areas and fed into the Provo, all to provide more space for homes, more safety from floods to homeowners, and reservoirs to ensure the perpetuity of modernization. And as Donald Worster reminds us, the Mormons played no small role in this harnessing of water’s wild and unpredictable ways, seeing dams and dikes as the way of the Lord. Several small hydroelectric dams were built on the Provo early in the century, and then two major dams were built, one in the 1940s and the other in the 1990s.

Within a century of the arrival of the white man, 95 percent of the native species in the river and of Utah Lake went extinct, this despite the fact that it had been the meat of the native fish of the river and lake that provided for humans for thousands of years and saved the lives of the pioneers in those early, hunger-ridden years of settlement. But this is only the most overt and measurable of consequences. Aquatic species worldwide are going extinct at much faster rates than terrestrials. When the fish go, that means the invertebrates, zooplankton, plants, and whole swaths of life go, too. END_OF_DOCUMENT_TOKEN_TO_BE_REPLACED

its ripening body,
freshly emerged from a confining
pupal case. It seemed resigned

to die, as if it bowed to fate,
despite seeing clearly the trap
descending,

the butterfly net he wielded was a
destiny just too wide, too deep to
muster a pretense of escape.

Perhaps it remembered the ants.

This was an antlion adult, who,
(named coldly in Greek Myrmeleontidae)

as a young larvae built cone traps
in the ochre sand, teased from the
weathering canyon walls.

In those days, it lived as a wingless larva,
a monster with jaws almost as long as
its body, buried in the center
of an ideal earth-grain
vortex, where it waited for

a hapless feast to tumble
unaware into the cone of
sand, where its empty jaws
waited eagerly, patiently,
watchfully silent.

As the ants fought
blindly to escape,
spilling sand
across a vanishing
pheromone trail €”the trap’s clever
construction forcing the
beast’s struggles
to collapse the diabolical
topology towards the
vertex, coaxing the sentinel’s prey
to the center. To the place
where ant becomes antlion.

He tries to explain his
easy triumph
with the net,
into which he swept up the creature
for cataloging,
collection,
for science at its most
unforgiving blindness.

He imagines
that its mind was yet foggy €”its
wings not yet dry, it was freshly

awakened new into the world, like
a mythic God.

He stoops down and sees
its pupal case lying in
the red sand, being scavenged

by harvester ants. How odd it seems
that this fine sand was
once sandstone, which

And there lying on the sand
an antlion pupal case, formed
from ant, being converted

back to ant,
completing
necessary circles.

Steve Peck is an ecologist at Brigham Young University. Creative works include a novel:  The Gift of the King’s Jeweler (2003 Covenant Communications); a self-published novella  A Short Stay in Hell (reviewed  here and  here), a short science fiction story:  The Flaw in the Lord Harrington Scenario, published in  HMS Beagle (online journal by Elsevier); poetry in  Dialogue,  Bellowing Ark,  BYU Studies,  Irreantum, Red Rock Review,  Glyphs III,  Tales of the Talisman (in press), and a chapbook of poetry published by the American Tolkien Society called  Flyfishing in Middle Earth.   A version of “The Ant Lion” appeared in Glyphs III (2007), 141-143. He blogs at bycommonconsent.com and has a faith/science blog called The Mormon Organon.

Victorian Violet Press, an online poetry magazine, is seeking submissions for the December issue. Please check out the magazine to get an idea of what type of poetry is published. You can find the magazine here.

Guidelines: Our taste in poetry is eclectic, but these subjects are preferred: inspirational, poetry for children, poetry about children, nature and life. Formal and free verse are both accepted, we particularly enjoy metrical poems that have lyricism, originality, accessibility and beauty.

Poems should not be obscure or overly abstract and should have a strong element of rhythm and a strong metrical element whether they are free verse or formalist.

Send 3-5 poems pasted in the body of an email with your name in the subject line. Simultaneous submissions and previously published poems are okay. Please wait three months after your last submission, before sending more poetry.