She picks soft apples from a flowered bowl. 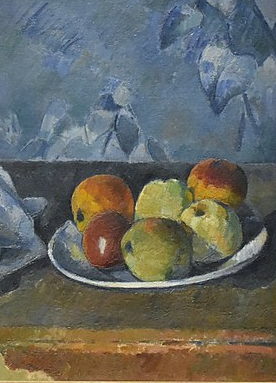 “Meant to use these, never got to it,”
she says. “Oh, well!” Four—no, five—she takes
them to the door, throws them through as far
as she can onto crusted snow. “Such waste.”

But I’m not fooled. I tell her, don’t feed wildlife.
They say the wild things lose their fending for
themselves. Or worse, become destructive. “Eh!”
she says. She waves me off. “Mebbe,” she says,
“something to that last one—true for bears—
true for people who are brutes like bears—
but they, those they, they say that same of all
impoverished souls—handouts ruin them. Any
those things at all, they happen only ’cause
you go Lawrentian on the creatures, exploit
their need and presence to glut your own thin nerves,
twanging for touch and bridling. Animals like
to do for themselves. Good times, they will. They don’t
come looking here. Too risky. Important thing?
Don’t ever ask for something in return.”

Lawrentian! Right. The books beside by her bed.
St. Mawr, Complete Poems, Woman Who Rode Away.
How can she even understand such things.
I can’t, I won’t die trying, and she’s old.

She looks at the window. A flock of juncos
swirls, as if a stage hand crouching underneath
her sill tossed them in the air on cue.
“‘Cept for birds. Even small-town grocers,
even hardware stores stock plenty seed
and suet. Pretty baths for them to wash in.
Sunshine-powered fountains, nesting boxes.
So don’t help wild things…all except the birds.”

Then she goes on about those mule deer does.
In winter, two, maybe three generations of
their offspring walking single file, they follow
a lead doe’s trail breaks through the snow
to cross our acreage. “Their  grace,” she says,
“burns ten times brighter when they’re standing still.
Seen them with the moonlight on their backs?”
She talks of winter, season of little to none:
“Scarce light, no food, the sole abundances,
freezing cold and suffering.” She claims to see
the life in does’ deep cells burn low and dim,
like green sparks frosted back to a wildflower’s root.
The does don’t want to spend an ember of it.
Remarking on that change, she says, “There,
but for the grace of opposable thumbs, go I.”
She’s fanciful that way. I let it go.

Because of them, those does, she lets some pecks
of summer peaches go, wasting on the trees.
The clever does—ones that take their chances—
they find them fast. She watches deer stand up
on stretched back legs to reach the higher limbs,
a front hoof braced against the trunk for balance.
Excitement lights in wrinkles on her face.
The treetop peaches, they twist loose and fall.
They’re gone by morning, only pits in dirt.
“To steel you for the rut,” she whispers, sighing.
“For all that madness, for fruit that grows within.
My body’s known enough of that. For you,
for the rut, I throw soft apples on hardened snow.” 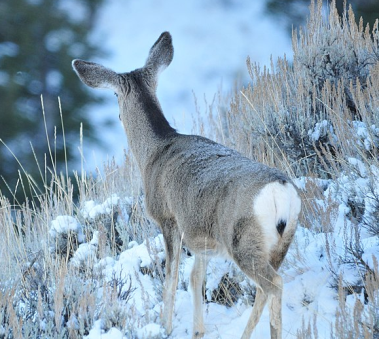 You steal their wildness from them, I say back.
Unbroken freedom keeps them pure and whole.
“Fool’s gold!” she says. “And cross-eyed sentiment.
And look at you, your slogans. ‘Unbroken Freedom.’
Freedom’s living safe from that!” She points
at leafless hedgerow poplars, the garden buried
under weeks more freeze than thaw. Her tone of voice
stirs images of winter winds as knives.
“We were out there, once. How come we’re not
still out there with ’em, competing with ’em, living
off ’em, being lived off by ’em, if living wild
is what you say!  Instead, we’re here inside.
We’re looking out. Apples from Argentina!
In a bowl my gram brought from the old country!
Layer up, and winter’s just a playground
for the likes of us, skiing, sledding, snowmen,
sleigh rides. When we’re done, it’s back inside,
food in our fridges, stoves to cook it, central
heating drying snow-soaked socks. Dear child,
that’s prosperity’s earliest yardstick: you
got enough to make it through to spring,’
or whatever it is you need to make it through to.
Those deer, they live in thorny poverty,
a freedom of a kind that breaks you, kind
that holds you to the lowest rungs of life.
Always looking over her shoulder, a doe,
startling at the slightest sound those ears pick up,
losing young to coyotes, cougars, cars. 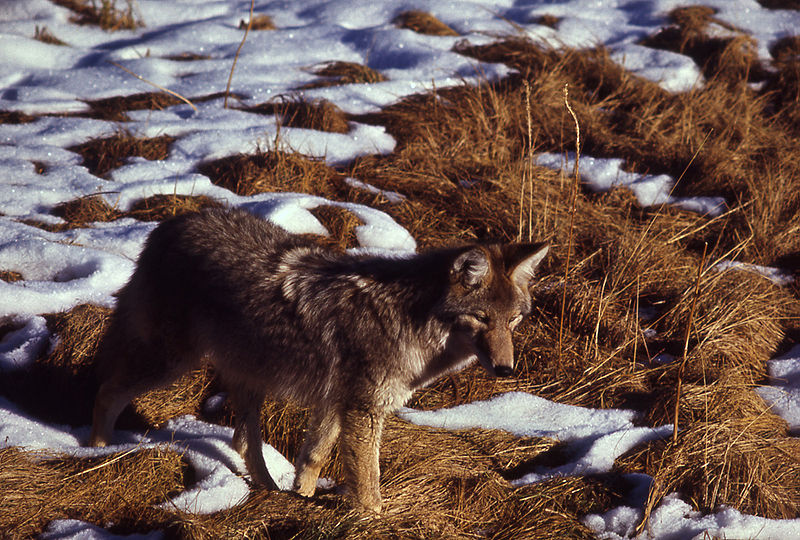 Including the likes of you, you driving bat-
outta-hell miles per hour everywhere you go.
She chews dry leavings during parched-out springs,
spends half her days in walking to reach water.
To reach safety of all kinds. She’s driven
to pick the bucks but raises fawns alone.
Her body, even braced on four fine legs,
struggles with demands of making babies,
making milk to feed them, birthing fawns,
getting them on their feet before so’s they can run.
If that ain’t captivity of the harshest sort,
or freedom of the worst. It’s fantasy,
what your ‘living free’ amounts to.  Compared
to any doe, the birdies got it good.”

Okay, I say, okay. But I’m not done.
Can’t just let it go. So what will you do
when wildlife people come around and say,
“Don’t feed wild animals for your health and safety.”
If they come and ask, “Why do you feed the deer?”

“And what about these apples in the snow?”

“‘For the birds,’ I’ll say. ‘The crows, and for the ravens.
Not my fault those darned deer get there first.'”