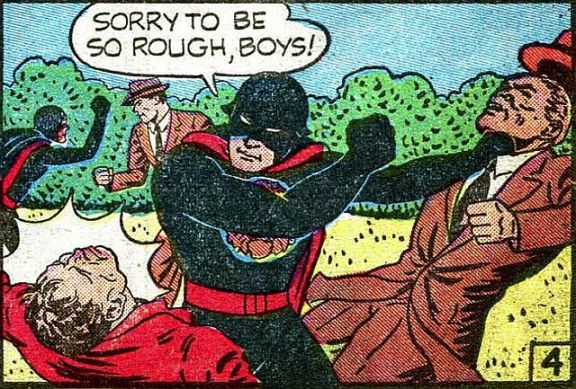 The world is in chaos, but Tom Turner is frying two eggs and a side of bacon. His wife, Mattie, sits at the kitchen table eating cold cereal and watching the news on her tablet. Revolutions are whittling away at South America. Europe is on the brink of collapse. China is squeezing the U.S. dry. In Salt Lake City, crime rates have tripled in six months. As Tom spatulas his eggs onto a plate, he overhears a report on the killing of Peep Stone, a local superhero. Six bullets to the chest. Police have no leads.

“Poor Peep,” Tom says. He takes a seat next to his wife and silently blesses his food.

“Did you know him?” Mattie asks when he raises his head.

“We worked together on a few cases,” Tom says. “He and I got our powers around the same time. Maybe even from the same doctor. I can’t remember.”

“They say the Korihors may have been involved.”

“I don’t doubt it,” Tom says. He cuts into his first egg and watches the yolk ooze across his plate. He adds salt and pepper and takes a bite. “Peep always wanted to take down one of the gangs,” he says after swallowing. “Back in ’47 he nearly took down the Gadiantons, but his inside contact betrayed him.”

“I’m so glad you’re out of the business,” Mattie says, placing her hand on his knee.

For fifteen years, Tom served the streets of Salt Lake City as the Curelom, one of a dozen Mormon superheroes to take up the cape when things first started getting bad. It cost him most of his savings to pay for the power enhancement surgery that gave him super-strength, but the satisfaction he got from crime fighting was well worth the price. Had the brethren not come out specifically against enhancements and vigilantism five years ago, he would probably still be out there fighting the good fight.

After breakfast, Tom takes TRAX to his office in Sandy. When he arrives, Karen, his boss, gives him bad news about their clients in Mexico. For the rest of the morning, he is occupied with conference calls to Chihuahua. His clients there threaten to pull out and take their business to a firm in the Texas Republic. Tom spends the better part of two hours convincing them to stay on. In the end, he loses them. The relative stability of the T.R. is too seductive.

“It’s this economy,” Tom says. “No one does business with the U.S. anymore.”

Sitting behind her desk, an oak antique from the mid-twentieth century, Karen is silent. With her hair pulled back in a tight bun, she is an imposing figure. The office rumor is that she had illegal work done on her brain to make her a telepath.

“I won’t let it happen again,” Tom says, rising from his chair. Sweat spots from his palms linger on the arm rests.

“Tom,” Karen says when he reaches the door. “This company barely gets by.”

“Things will perk up.”

“I think it’s time we part ways, Tom” she says.

When he gets home, Tom finds a note from Mattie. One of the sisters she visit teaches was robbed during the night. Mattie is helping her change the locks on her doors. “Feel free to call for take-out,” the note says. “I’m craving Chinese, but I’ll understand if you want to be patriotic.”

Tom is relieved to be alone. On the ride home, as he caught glimpses of the mountains between the megascrapers and East Bench pleasure domes, he’d brainstormed ways to tell Mattie about being canned again. He knows Mattie will understand, but he hates to disappoint her. This is his third firing since hanging up the cape. At heart he is a superhero, not a businessman.

Hungry and depressed, Tom places an order for an extra-large bacon and sausage thin crust pizza and steps out onto the fire escape to wait. This evening is cool for July. In his superhero days, he used to long for weather like this. Body armor is murder on hot summer days. His old sidekick, the Cumom, was killed during the heatwave of 2155. They were chasing a pair of Gadianton thugs when she grew dizzy from the heat. He told her to take a breather in an alley, get some water, rest. He went on ahead and got the job done. When he came back for her, she was dead. His arch-nemesis, Extermination Order, had snapped her neck. The whole thing had been a set up.

After the Cumom’s death, he’d nearly quit, but Mattie convinced him to stay on. The Cumom was her cousin, practically her sister, and she wanted to see her avenged. Tom still counts himself lucky that he was able to bring down Extermination Order before the Brethren spoke out against superheroing. He might have gone inactive otherwise.

Tom eats pizza and watches the five o’clock news on his tablet. The world remains in chaos. The President declares Louisiana a war zone. California is threatening to secede again. The Native American Alliance has seized arsenals in North Dakota and Oklahoma. In local news, four former supervillains have escaped from the maximum security prison compound in Tooele. Extermination Order isn’t one of them, but Missouri Wildcat is. Tom brought him to justice back in ’50. No doubt he’ll be seeking vengeance.

Five years without the cape is enough to make the average superhero soft. But not Tom. He paid top dollar for his power enhancements, and he feels as strong today as he did twenty years ago. But he loves the Church. He wants to be a good Mormon, wants to follow the brethren, even if the mean streets of this self-destructing world are calling out to every fiber and sinew of his inner Curelom. It makes his heart race just thinking about it.

Scott Hales does not usually write fiction, but when he does, he tries to keep it around 1000 words. He blogs at A Motley Vision, Dawning of a Brighter Day, and Modern Mormon Men. He also maintains a personal Mormon literature blog, The Low-Tech World. When he isn’t writing short short stories or blogging or parenting or (now) cartooning, he is revising his doctoral dissertation on the Mormon novel.

4 thoughts on “The Curelom by Scott Hales”